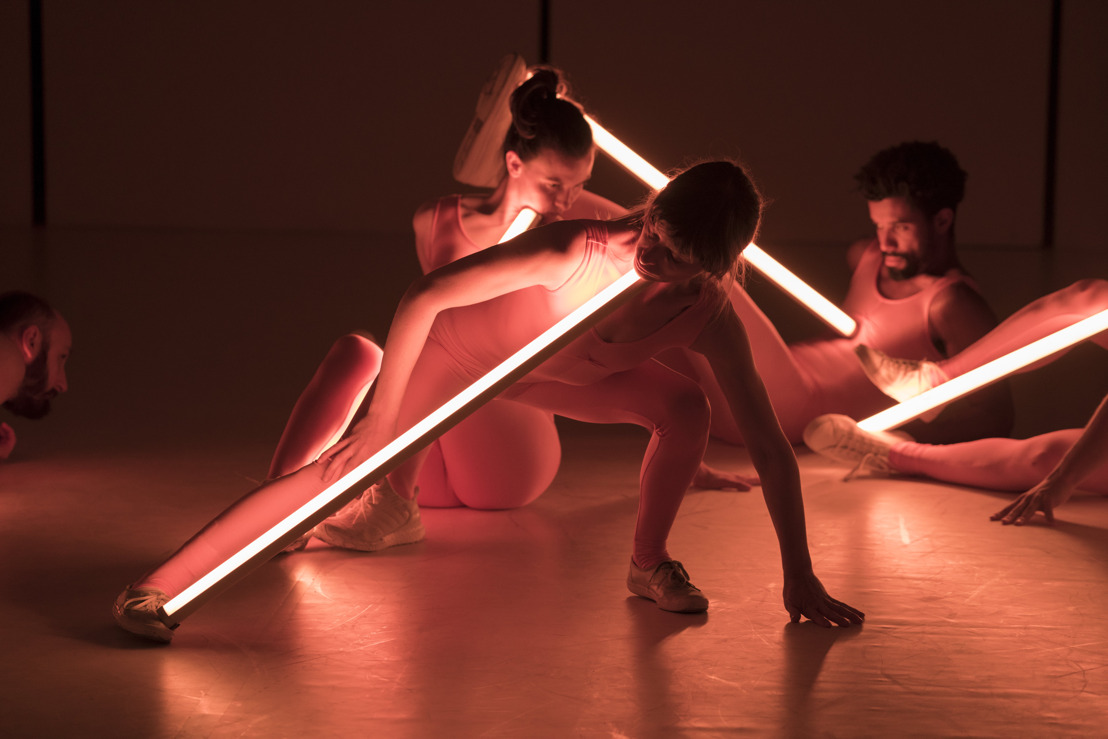 Mette Ingvartsen creates a universe in which people, technology and organic matter coexist to create an abstract set of movements. Inspired by how bodies are sensorially affected by the digital, the performance explores a poetics of plasticity, abstraction and imagination. How can we understand technology as something that stays active in our bodies, even when all technical tools have been switched off? How does the omnipresence of technology affect the plasticity of our brain? Through light, shadow and reflection, the nine dancers open an enchanting landscape that you can enter as a viewer.
The Danish Brussels based dancer and choreographer Mette Ingvartsen graduated from PARTS in 2004 and was artist-in-residence at Kaaitheater from 2013 until 2016. She has made several thematic cycles around issues like ecology (The Artificial Nature Project) and sexuality (The Red Pieces). Moving in Concert opens a new research focused on technology. Read our interview with Mette here.

Moving in Concert will première at Kaaitheater and then travel on to Kortrijk (NEXT festival), Paris (Festival d'Automne) and across Europe.

Co-funded by Act & the Creative Europe Programme of the European Union.

Choreographer and Kaaitheater artist-in-residence Vera Tussing has focused for many years on the sensorial. For Tactile Quartet(s) she has invited the string quartet Quatuor MP4 to join four dancers onstage for a playful encounter between movement and sound. The four musicians play passages from various quartets by Franz Schubert, Anton Dvorak and Florence Price as well as contemporary works by Georg Friedrich Haas and Caroline Shaw. As they play, the musicians engage in one-on-one tactile encounters with the audience, creating physical interaction. Everything arises from touch – a bow on a string, an arm on a shoulder, an acoustic sensation on your skin. What happens when we take the movements of a string quartet seriously as a choreography, and dance along?

Tactile Quartet(s) will première at Kaaitheater and be staged at STUK (Leuven) a.o.

Landscape Orchestra seeks a musical answer to the question of how we can depict departure, travel, and arrival. The production visits the landscapes that we traverse on our way to different and better places, and asks us to reflect on the perspectives from which we look at each other and the expectations we have of each other.

Music theatre makers Niko Hafkenscheid, Hedvig Biong and Pablo Castilla create this production together with Globe Aroma, an arts centre working with newcomers and refugees in the heart of Brussels. Kaaitheater is a structural partner for their theatre productions and has previously presented Underneath Which Rivers Flow by Jozef Wouters, Capsaicin by Michiel Soete, and De Brievenschrijver by Simon Allemeersch.

Under the title Hyperpresent, five contemporary thinkers will give a talk on a new idea that they introduced themselves. Afterwards, they will engage in a conversation with philosopher Laurent De Sutter – who curated this new series for the 2019-2020 Kaaitheater season.

Keller Easterling is an American architect, urbanist, writer, and professor at Yale University. Her work mainly focuses on the infrastructure organisation of the world. Her last book is Extrastatecraft: The Power of Infrastructure Space.

In this conversation, Keller Easterling will explore areas of infrastructure with the greatest impact on our world – examining everything from standards for the thinness of credit cards to the urbanism of mobile telephony, the world’s largest shared platform, to the ‘free zone,’ the most virulent new world city paradigm, and suggesting some unexpected techniques for resisting power in the modern world.

Co-funded by ACT, the Creative Europe Programme of the European Union.

Choreographer and Kaaitheater-in-residence Radouan Mriziga was inspired by an old love: rap music. Along with seven young performers, he researched everything that makes rap unique: the rhythm, the flow, the statements and gestures, and its history from the grandmasters to Kendrick Lamar. In 8.2, they attempt to capture the essence of a style of music that transcends musical trends and survives across generations – and which constantly reinvents itself.

8.2 premiered in hetpaleis (Antwerp) in February. In September the show was staged in Ghent durin the 2019 TheaterFestival, followed by a tour across Belgium and the Netherlands.

Michiel Vandevelde goes in search of traces of the legacy of May ’68, along with a new generation of young performers. Will they open new perspectives on the future when they research half a century of history in a wild choreography of iconic images?
Paradise Now was staged at Kaaitheater during the 2018 Kunstenfestivaldesarts and has been touring widely  een ruime Europese toernee opzitten. In het najaar doet de voorstelling nog Potsdam, Gent (tijdens het TheaterFestival) en Düsseldorf en voor een tweede maal Brussel (Kaaitheater) aan.

An apparently endless chain of murders and blood feuds: this is the plot of the Oresteia. In Orestes in Mosul, Milo Rau combines the tragedy of tragedies with contemporary political conflicts. With an ensemble of Iraqi and European actors, Rau presents an Oresteia for our time.

The production premiered at NTGent last April and then started its tour across Europe.

Move 37 premièred at deSingel (Antwerp) and was staged at STUK in Leuven, Southbank in Londen and Vooruit in Ghent. After being staged at Kaaitheater, Move 37 travels to Amsterdam (De Brakke Grond).

Kaaitheater is a stage for dance, theatre, performance, music and debate in Brussels, set in a dynamic part of the city in full development. Founded in 1977 as a pioneer of innovative performing arts, this house has grown into a platform for both work by artists of the Flemish Wave and new generations of performing artists. From Brussels to international, from small to large venues, and just as well in the squares and the streets, where urban and global themes are tangible.

Over the coming years the team from Kaaitheater will, under the motto How to Be Many?, make room for a broad spectrum of stories, perspectives, artists and audiences, so we can learn to better reflect the city's many voices. This is why we are handing over some of our own resources to organisations and groups that are still not visible enough on the Brussels stages, with the invitation to make their own artistic programmes and thus make their voices louder.

Furthermore, we are charting new paths around debate, education and participation, opening the way to co-ownership by artists, Brussels residents and many audiences.

Along the canal that connects our two locations Kaaitheater and the Kaaistudios, the activities of Kaai move with the times, stimulate social and artistic debates and embrace the diverse performing arts of today. Welcome!